Two-alternative forced choice (2AFC) (and the variant Two-interval forced choice (2IFC)) Task is a psychophysical method, developed by Gustav Theodor Fechner,[1] for eliciting responses from a person about his or her experiences of a stimulus. Specifically, the 2AFC experimental design is commonly used to test speed and accuracy of choices between two alternatives given a timed interval. The task is an established controlled measure of choice and is widely used to test a range of choice behaviors in animals and in humans. The basic components of a 2AFC task are 1) two alternative choices presented simultaneously (e.g. two visual stimuli), 2) a delay interval to allow a response/choice, 3) a response indicating choice of one of the stimuli.

There are various manipulations in the design of the task, engineered to test specific behavioral dynamics of choice. In one well known experiment of attention that examines the attentional shift, the Posner Cueing Task uses a 2AFC design to present two stimuli representing two given locations.[2] In this design there is an arrow that cues which stimulus (location) to attend to. The person then has to make a response between the two stimuli (locations) when prompted. In animals, the 2AFC task has been used to test reinforcement probability learning, for example such as choices in pigeons after reinforcement of trials.[3] A 2AFC task has also been designed to test decision making and the interaction of reward and probability learning in monkeys.[4]

Example of a random dot kinetogram as used in a 2AFC task.

Monkeys were trained to look at a center stimulus and were then presented with two salient stimuli side by side. A response can then be made in the form of a saccade to the left or to the right stimulus. A juice reward is then administered after each response. The amount of juice reward is then varied to modulate choice.

In a different application, the 2AFC is designed to test discrimination of motion perception. The random dot motion coherence task, introduces a random dot kinetogram, with a percentage of net coherent motion distributed across the random dots.[5][6] The percentage of dots moving together in a given direction determines the coherence of motion towards the direction. In most experiments, the participant must make a choice response between two directions of motion (e.g. up or down), usually indicated by a motor response such as a saccade or pressing a button.

It is possible to introduce biases in decision making in the 2AFC task. For example, if one stimulus occurs with more frequency than the other, then the frequency of exposure to the stimuli may influence the participant's beliefs about the probability of the occurrence of the alternatives.[4][7] Introducing biases in the 2AFC task is used to modulate decision making and examine the underlying processes.

There are typically three assumptions made by computational models using the 2AFC:

i) evidence favoring each alternative is integrated over time; ii) the process is subject to random fluctuations; and iii) the decision is made when sufficient evidence has accumulated favoring one alternative over the other.

It is typically assumed that the difference in evidence favoring each alternative is the quantity tracked over time and that which ultimately informs the decision - however, evidence for different alternatives could be tracked separately.[7] 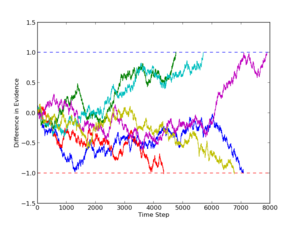 Example of six evidence accumulation sequences from an unbiased (100% noise) source. The dotted lines indicate the thresholds for decision making for each of the two alternatives.

The Drift Diffusion Model (DDM) is a well defined [18] model, that provably implements an optimum decision procedure for 2AFC.[19] It is the continuous analog of a Random walk model.[7] The DDM assumes that in a 2AFC task, the subject is accumulating evidence for one or other of the alternatives at each time step, and integrating that evidence until a decision threshold is reached. As the sensory input which constitutes the evidence is noisy, the accumulation to the threshold is stochastic rather than deterministic - this gives rise to the directed Random walk like behavior. The DDM has been shown to describe accuracy and reaction times in human data for 2AFC tasks.[13][18]

Example of ten evidence accumulation sequences for the DDM, where the true result is assigned to the upper threshold. Due to the addition of noise, one sequence has produced an inaccurate decision.

The accumulation of evidence in the DDM is governed according to the following formula:

At time zero, the evidence accumulated, x, is set equal to zero. At each time step, some evidence, A, is accumulated for one of the two possibilities in the 2AFC. A is positive if the correct response is represented by the upper threshold, and negative if the lower. In addition, a noise term, cdW, is added to represent noise in input. On average, the noise will integrate to zero.[7] The extended DDM[13] allows for selection of

and the starting value of

from separate distributions - this provides a better fit to experimental data for both accuracy and reaction times.[20] [21]

The Ornstein-Uhlenbeck model[14] extends the DDM by adding another term,

, to the accumulation that is dependent on the current accumulation of evidence - this has the net effect of increasing the rate of accumulation towards the initially preferred option.

In the race model,[11][12][22] evidence for each alternative is accumulated separately, and a decision made either when one of the accumulators reaches a predetermined threshold, or when a decision is forced and then the decision associated with the accumulator with the highest evidence is chosen. This can be represented formally by:

The race model is not mathematically reducible to the DDM,[7] and hence cannot be used to implement an optimal decision procedure.

is a shared decay rate of the accumulators, and

is the rate of mutual inhibition.

is the fraction of accumulator input that inhibits the alternate accumulator.

The third accumulator has an independent decay coefficient,

, and increases based on the current values of the other two accumulators, at a rate modulated by

In the parietal lobe, lateral intraparietal cortex (LIP) neuron firing rate in monkeys predicted the choice response of direction of motion suggesting this area is involved in decision making in the 2AFC.[4][23][25]

Neural data recorded from LIP neurons in rhesus monkeys supports the DDM, as firing rates for the direction selective neuronal populations sensitive to the two directions used in the 2AFC task increase firing rates at stimulus onset, and average activity in the neuronal populations is biased in the direction of the correct response.[23][26][27][28] In addition, it appears that a fixed threshold of neuronal spiking rate is used as the decision boundary for each 2AFC task.[29]