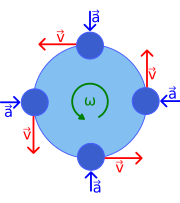 Figure 1: Velocity v and acceleration a in uniform circular motion at angular rate ω; the speed is constant, but the velocity is always tangent to the orbit; the acceleration has constant magnitude, but always points toward the center of rotation

Figure 2: The velocity vectors at time t and time t + dt are moved from the orbit on the left to new positions where their tails coincide, on the right. Because the velocity is fixed in magnitude at v = r ω, the velocity vectors also sweep out a circular path at angular rate ω. As dt → 0, the acceleration vector a becomes perpendicular to v, which means it points toward the center of the orbit in the circle on the left. Angle ω dt is the very small angle between the two velocities and tends to zero as dt→ 0 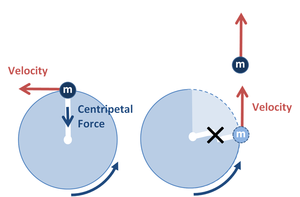 Figure 3: (Left) Ball in circular motion – rope provides centripetal force to keep ball in circle (Right) Rope is cut and ball continues in straight line with velocity at the time of cutting the rope, in accord with Newton's law of inertia, because centripetal force is no longer there

In physics, uniform circular motion describes the motion of a body traversing a circular path at constant speed. The distance of the body from the axis of rotation remains constant at all times. Though the body's speed is constant, its velocity is not constant: velocity, a vector quantity, depends on both the body's speed and its direction of travel. This changing velocity indicates the presence of an acceleration; this centripetal acceleration is of constant magnitude and directed at all times towards the axis of rotation. This acceleration is, in turn, produced by a centripetal force which is also constant in magnitude and directed towards the axis of rotation.

In the case of rotation around a fixed axis of a rigid body that is not negligibly small compared to the radius of the path, each particle of the body describes a uniform circular motion with the same angular velocity, but with velocity and acceleration varying with the position with respect to the axis.

For a path of radius r, when an angle θ is swept out, the distance travelled on the periphery of the orbit is s = rθ. Therefore, the speed of travel around the orbit is

where the angular rate of rotation is ω. (By rearrangement, ω = v/r.) Thus, v is a constant, and the velocity vector v also rotates with constant magnitude v, at the same angular rate ω.

The left-hand circle in Figure 2 is the orbit showing the velocity vectors at two adjacent times. On the right, these two velocities are moved so their tails coincide. Because speed is constant, the velocity vectors on the right sweep out a circle as time advances. For a swept angle dθ = ω dt the change in v is a vector at right angles to v and of magnitude v dθ, which in turn means that the magnitude of the acceleration is given by