Heim theory, initially proposed by the late German physicist Burkhard Heim, is an attempt to develop a theory of everything in theoretical physics. Heim attempted to resolve incompatibilities between quantum theory and general relativity. To meet that goal, he developed a mathematical approach based on quantizing spacetime, and proposed the "metron" as a (two-dimensional) quantum of (multidimensional) space. Part of the theory is formulated in terms of difference operators; Heim called this type of mathematical formalism Selector calculus.[1] Heim theory's six dimensional model was later extended to eight and twelve dimensions, in collaboration with Walter Dröscher.[2][3][4] Dröscher and Jochem Hauser, professor and former head of the Aero- and Aerothermodynamics Department of the European Space Agency,[5] have attempted to apply Heim theory to nonconventional space propulsion and faster than light concepts, as well as the origin of dark matter.[4][6]

Heim theory has been criticized because much of the original work and subsequent theories were not initially peer reviewed.[7] Heim eventually published some of his work in 1977[8] and more recently aspects of Extended Heim Theory have also been submitted to the scientific community's inspection.[9]

The mathematics behind Heim's theory requires extending spacetime with extra dimensions; various formulations by Heim and his successors involve six, eight, or twelve dimensions. Within the quantum spacetime of Heim theory, elementary particles are represented as "hermetry forms" or multidimensional structures of space. Heim has claimed that his theory yields particle masses directly from fundamental physical constants and that the resulting masses are in agreement with experiment. This claim was disputed by physicist John Reed in 2006, who subsequently changed his mind with further research and now thinks there is something to Heim's theory.[10] In the Physics Forum, Sept. 4 2007, Reed wrote, "I'm more convinced now that there is really something to his theory. I don't understand much of the math yet. It's very complicated and different from anything I'm familiar with. I have a Ph.D. in physics so I know something about physics." 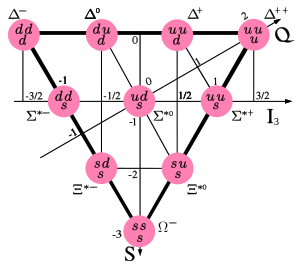 For Heim, this composite nature was an expression of internal, six-dimensional structure. After his death, others have continued with his multi-dimensional "quantum hyperspace" framework. Most notable are the theoretical generalizations put forth by Walter Dröscher, who worked in collaboration with Heim at some length. Their combined theories are also known as "Heim-Dröscher" theories or Extended Heim theory.[11]

There are some differences between the original "Heim Theory" and the extended versions proposed by his successors. For example, in its original version Heim theory has six dimensions, i.e., the 4 of normal space-time with two extra timelike dimensions. Dröscher first extended this to eight and claimed that this yields quantum electrodynamics along with the "particle zoo" of mesons and baryons. Later, four more dimensions were used to arrive at the twelve dimensional version, which involves extra gravitational forces; one of these corresponds to quintessence.[11] Although it purports to unify quantum mechanics and gravitation, the original Heim theory cannot be considered a theory of everything because it does not incorporate all known experimental data. In particular, it gives predictions only for properties of individual particles, without making detailed predictions about how they interact. The theory also allows for particle states that don't exist in the Standard Model, including a neutral electron and two extra light neutrinos, and many other extra states. Presently, there is no known mechanism for the exclusion of these extra particles, nor an explanation for their non-observation.[12] Although it is claimed that Heim theory can incorporate the modern structure of particle physics,[11] the available results predict the masses for composite hadrons rather than quarks and do not include gluons or the W and Z bosons,[13] which are experimentally very well established.[14][15][16] In Heim theory, quarks are interpreted as 'condensation zones' of the six-dimensional internal structure of the particles,[17] and the gluons are asserted to be associated with one of the "hermetry forms".[18]

A small group of physicists are now trying to bring the theory to the attention of the scientific community, by publishing and copy-editing Heim's work, and by checking and expanding the relevant calculations. Recently,Template:When a series of presentations of Heim theory was made by Hauser, Dröscher and von Ludwiger. Papers based on the former were published in conference proceedings by the American Institute of Physics journal in 2005 and 2010 (see table of contents in [19])[20] One article has won a prize for the best paper received in 2005 by the AIAA Nuclear and Future Flight Technical Committee.[21] Von Ludwiger's presentation was to the First European Workshop on Field Propulsion, January 20–22, 2001 at the University of Sussex. Dröscher claimed to have successfully extended Heim's six-dimensional theory, which had been sufficient for derivation of the mass formula, to an eight-dimensional theory which included particle interactions. Marc Millis, former head of the Breakthrough Propulsion Physics Program mentioned the Dröscher/Heim concepts in an 2010 International Astronautical Federation conference contribution as "Not yet rigorously articulated".[22][23][24]

Dröscher and Hauser developed the category of non-ordinary matter in 2008.[25] Heim theory predicts a neutral electron,[26] although in a popular talk, Heim notes that while a neutral electron is allowed by his theory, it is not required.[27] It would be difficult to reconcile a prediction of a neutral electron with the lack of any observation of the particle [28]Template:Verify source. According to the Totalitarian principle that every interaction not forbidden must occur, such a light neutral particle should be one of the possible end products of the decay of every known elementary particle,[29] and so theoretically has a small probability of occurring in every experiment involving particle collisions.

The predicted masses were claimed to have been derived by Heim using only 4 parameters - h (Planck's Constant), G (Gravitational constant), vacuum permittivity and permeability.

Predictions for a quantum gravity force

In the 1950s, Heim had predicted what he termed a 'contrabary' effect whereby photons, under the influence of a strong magnetic field in a certain configuration, could be transformed into 'gravito-photons', which would provide an artificial gravity force. This idea caused great interest at the time.[30] A recent series of experiments by Martin Tajmar et al., partly funded by European Space Agency, may have produced the first evidence of artificial gravity [31] (about 18 orders of magnitude greater than what General Relativity predicts). Template:As of, groups at Berkeley and elsewhere were attempting to reproduce this effect. By applying their 'gravito-photon' theory to bosons, Dröscher and Hauser were able to predict the size and direction of the effect. A further prediction of Heim-Dröscher theory shows how a different arrangement of the experiment by Tajmar et al. could produce a vertical force against the direction of the Earth's gravity.

However, in July 2007, a group in Canterbury, New Zealand, said that they failed to reproduce Tajmar et al.Template:'s effect, concluding that, based on the accuracy of the experiment, any such effect, if it exists, must be 21 times smaller than that predicted by the theory proposed by Tajmar in 2006.[32] Tajmar et al., however, interpreted a trend in the Canterbury data of the order expected, though almost hidden by noise. They also reported on their own improved laser gyro measurements of the effect, but this time found 'parity breaking' in that only for clockwise spin did they note an effect, whilst for the Canterbury group there was only an anti-clockwise effect .[33] In the same paper, the Heim-Theory explanation of the effect is, for the first time, cited as a possible cause of the artificial gravity. Tajmar has recently found additional support from Gravity Probe B results.[34]

Selector calculus is a form of calculus, employed by Burkhard Heim in formulating his theory of physics. The differencing operator is intended to be analogous to taking derivatives of functions.

in difference operator. The summation operator is intended to be analogous with integration. Instead of using the integral sign, Heim substitutes a bold italicised capital S for the typical integral sign. In this case

Template:Expand section Physicist Gerhard Bruhn has criticized Heim theory for mathematical errors (confusion between positive definite matrices and indefinite matrices) and for overly restrictive and unphysical assumptions that cause it to apply only to manifolds with a Euclidean geometry ("flat manifolds"), and not to the Minkowski geometry required by general relativity. In addition he observes that it has not been properly peer-reviewed, and criticizes the later proponents of the theory for misleading claims of academic affiliation.[36]

First and second publication in a peer reviewed scientific journal