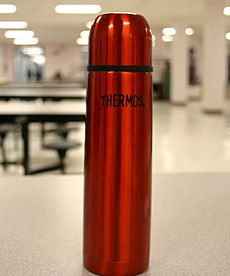 The typical design of a Thermos brand vacuum flask, used for maintaining the temperature of fluids such as coffee.

Diagram of a vacuum flask

A cryogenic storage dewar of liquid nitrogen, used to supply a cryogenic freezer

A vacuum flask (also known as a Dewar flask, Dewar bottle or Thermos) is an insulating storage vessel that greatly lengthens the time over which its contents remain hotter or cooler than the flask's surroundings. Invented by Sir James Dewar in 1892, the vacuum flask consists of two flasks, placed one within the other and joined at the neck. The gap between the two flasks is partially evacuated of air, creating a near-vacuum which prevents heat transfer by conduction or convection.

Vacuum flasks are used domestically to keep beverages hot or cold for extended periods of time and for many purposes in industry.

The vacuum flask was designed and invented by Scottish scientist Sir James Dewar in 1892 as a result of his research in the field of cryogenics and is sometimes called a Dewar flask in his honor. While performing experiments in determining the specific heat of the element of palladium, Dewar formed a brass chamber that he enclosed in another chamber to keep the palladium at its desired temperature.[1] He evacuated the air between the two chambers creating a partial vacuum to keep the temperature of the contents stable. Through the need for this insulated container, James Dewar created the vacuum flask which became a significant tool for chemical experiments but also became a common household item. The flask was later developed using new materials such as glass and aluminum; however, Dewar refused to patent his invention.[1]

Prior to Dewar's invention, German chemist and physician Adolf Ferdinand Weinhold invented his own version of a vacuum flask in 1881.[2]Template:Failed verification

Dewar's design was quickly transformed into a commercial item in 1904 as two German glassblowers (one of whom was Reinhold Burger) discovered that it could be used to keep cold drinks cold and warm drinks warm.[3][4] The Dewar flask design was never patented, but the German men who discovered the commercial use for the product renamed it Thermos and claimed the rights to the commercial product and the trademark to the name. The manufacturing and performance of the Thermos bottle was significantly improved and refined by the viennese inventor and merchant Gustav R. Paalen, who designed various types for domestic use which he patented and distributed widely through his Thermos Bottle Companies also in the US and Canada. The name later became a genericized trademark after the term "thermos" became the household name for such a liquid container.[3] The vacuum flask went on to be used for many different types of scientific experiments and the commercial “Thermos” was transformed into a common item. "Thermos" remains a registered trademark in some countries but was declared a genericized trademark in the US in 1963 since it is colloquially synonymous with vacuum flasks in general.

After the German glassblowers determined the commercial uses for the Dewar flask, the technology was sold to the Thermos company who used it to mass-produce vacuum flasks for at-home use.[3] Over time, the company expanded the size, shapes and materials of these consumer products, primarily used for carrying coffee on the go and carrying liquids on camping trips to keep them either hot or cold. Eventually other manufacturers produced similar products for consumer use.

The vacuum flask consists of two flasks, placed one within the other and joined at the neck. The gap between the two flasks is partially evacuated of air, creating a near-vacuum which prevents heat transfer by conduction or convection. Heat transfer by thermal radiation may be minimized by silvering flask surfaces facing the gap but can become problematic if the flask's contents or surroundings are very hot; hence vacuum flasks usually hold contents below the boiling point of water. Most heat transfer occurs through the neck and opening of the flask, where there is no vacuum. Vacuum flasks are usually made of metal, borosilicate glass, foam or plastic and have their opening stoppered with cork or polyethylene plastic. Vacuum flasks are often used as insulated shipping containers.

Extremely large or long vacuum flasks sometimes cannot fully support the inner flask from the neck alone, so additional support is provided by spacers between the interior and exterior shell. These spacers act as a thermal bridge and partially reduce the insulating properties of the flask around the area where the spacer contacts the interior surface.

Vacuum flasks are used to maintain their contents (often but not always liquid) at a temperature higher or lower than ambient temperature, at ambient pressure of approximately 1 atmosphere (14.7 psi). Domestically and in the food industry, they are often used to keep food and drink either cold or hot. A typical domestic vacuum flask will keep liquid cool for about 24 hours and warm for up to 8.

Some vacuum flasks include one or two fitted cups for ease of use with beverages, especially during travel or picnics.

In laboratories and industry, vacuum flasks are often used to hold liquefied gases (often LN2) for flash freezing, sample preparation and other processes where maintaining an extreme low temperature is desired. Larger vacuum flasks store liquids that become gaseous at well below ambient temperature, such as oxygen and nitrogen; in this case the leakage of heat into the extremely cold interior of the bottle results in a slow boiling-off of the liquid so that a narrow unstoppered opening, or a stoppered opening protected by a pressure relief valve, is necessary to prevent pressure from building up and eventually shattering the flask. The insulation of the vacuum flask results in a very slow "boil" and thus the contents remain liquid for long periods without refrigeration equipment.

Vacuum flasks have been used to house standard cells and ovenized Zener diodes, along with their printed circuit board, in precision voltage-regulating devices used as electrical standards. The flask helped with controlling the Zener temperature over a long time span and was used to reduce variations of the output voltage of the Zener standard owing to temperature fluctuation to within a few parts per million.

One notable use was by Guildline Instruments, of Canada, in their Transvolt, model 9154B, saturated standard cell, which is an electrical voltage standard. Here a silvered vacuum flask was encased in foam insulation and, using a large glass vacuum plug, held the saturated cell. The output of the device was 1.018 volts and was held to within a few parts per million.

The design and shape of the Dewar flask was used as a model for optical experiments based on the idea that the shape of the two compartments with the space in between is similar to the way the light hits the eye.[6] The vacuum flask has also been part of experiments using it as the capacitor of different chemicals in order to keep them at a consistent temperature.[7]

Vacuum flasks are at risk of implosion hazard and glass vessels under vacuum in particular may shatter unexpectedly. Chips, scratches or cracks can be a starting point for dangerous vessel failure, especially when the vessel temperature changes rapidly (when hot or cold liquid is added). Proper preparation of the Dewar vacuum flask by tempering prior to use is advised to maintain and optimize the functioning of the unit. Glass vacuum flasks are usually fitted into a metal base with the cylinder contained in or coated with mesh, aluminum or plastic to aid in handling, protect from physical damage and to contain fragments should they break.

In addition, cryogenic storage dewars are usually pressurized and may explode if pressure relief valves are not used.

The rate of heat (energy) loss through a vacuum flask can be analyzed thermodynamically, starting from the second TdS relation:[8]

Assuming constant pressure throughout the process,

Rearranging the equation in terms of the temperature of the outside surface of the vacuum flask's inner wall,

Now consider the general expression for heat loss due to radiation:

In the case of the vacuum flask,

Substituting our earlier expression for Tb',

Since the absorptivity of polished silver is the same as its emissivity, we can write

where we substitute each of the expressions for each component into the equation.

The rate of entropy generation of this process can also be calculated, starting from entropy balance:

Since there is no heat added to the system,