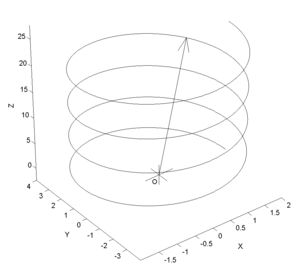 A common example of a vector valued function is one that depends on a single real number parameter t, often representing time, producing a vector v(t) as the result. In terms of the standard unit vectors i, j, k of Cartesian 3-space, these specific type of vector-valued functions are given by expressions such as

where f(t), g(t) and h(t) are the coordinate functions of the parameter t. The vector r(t) has its tail at the origin and its head at the coordinates evaluated by the function.

The vector shown in the graph to the right is the evaluation of the function near t=19.5 (between 6π and 6.5π; i.e., somewhat more than 3 rotations). The spiral is the path traced by the tip of the vector as t increases from zero through 8π.

Vector functions can also be referred to in a different notation:

The domain of a vector-valued function is the intersection of the domain of the functions f, g, and h.

Derivative of a three-dimensional vector function

is a vector-valued function, then

The vector derivative admits the following physical interpretation: if r(t) represents the position of a particle, then the derivative is the velocity of the particle

Likewise, the derivative of the velocity is the acceleration

where ai is the scalar component of a in the direction of ei. It is also called the direction cosine of a and ei or their dot product. The vectors e1,e2,e3 form an orthonormal basis fixed in the reference frame in which the derivative is being taken.

If a is regarded as a vector function of a single scalar variable, such as time t, then the equation above reduces to the first ordinary time derivative of a with respect to t,[1]

If the vector a is a function of a number n of scalar variables qr (r = 1,...,n), and each qr is only a function of time t, then the ordinary derivative of a with respect to t can be expressed, in a form known as the total derivative, as[1]

Derivative of a vector function with nonfixed bases

where NωE is the angular velocity of the Earth relative to the inertial frame N. Since velocity is the derivative of position, NvR and EvR are the derivatives of rR in reference frames N and E, respectively. By substitution,

where EvR is the velocity vector of the rocket as measured from a reference frame E that is fixed to the Earth.

In the case of dot multiplication, for two vectors a and b that are both functions of q,[1]

Similarly, the derivative of the cross product of two vector functions is[1]

Derivative of an n-dimensional vector function

can be written as

If f is a function of several variables, say of

, then the partial derivatives of the components of f form a

Functions with values in a Hilbert space

If the argument of f is a real number and X is a Hilbert space, then the derivative of f at a point t can be defined as in the finite-dimensional case:

, where Y is an infinite-dimensional vector space).

N.B. If X is a Hilbert space, then one can easily show that any derivative (and any other limit) can be computed componentwise: if

is an orthonormal basis of the space X), and

Most of the above hold for other topological vector spaces X too. However, not as many classical results hold in the Banach space setting, e.g., an absolutely continuous function with values in a suitable Banach space need not have a derivative anywhere. Moreover, in most Banach spaces setting there are no orthonormal bases.