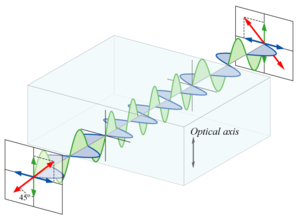 A half-wave plate. Linearly polarized light entering a waveplate can be resolved into two waves, parallel (shown as green) and perpendicular (blue) to the optical axis of the waveplate. In the plate, the parallel wave propagates slightly slower than the perpendicular one. At the far side of the plate, the parallel wave is exactly half of a wavelength delayed relative to the perpendicular wave, and the resulting combination (red) is a mirror-image of the entry polarization state (relative to the optical axis).

Waveplates are constructed out of a birefringent material (such as quartz or mica), for which the index of refraction is different for different orientations of light passing through it. The behavior of a waveplate (that is, whether it is a half-wave plate, a quarter-wave plate, etc.) depends on the thickness of the crystal, the wavelength of light, and the variation of the index of refraction. By appropriate choice of the relationship between these parameters, it is possible to introduce a controlled phase shift between the two polarization components of a light wave, thereby altering its polarization.[1]

A waveplate works by shifting the phase between two perpendicular polarization components of the light wave. A typical waveplate is simply a birefringent crystal with a carefully chosen orientation and thickness. The crystal is cut into a plate, with the orientation of the cut chosen so that the optic axis of the crystal is parallel to the surfaces of the plate. This results in two axes in the plane of the cut: the ordinary axis, with index of refraction no, and the extraordinary axis, with index of refraction ne. For a light wave normally incident upon the plate, polarization component along the ordinary axis travels through the crystal with a speed vo = c/no, while the polarization component along the extraordinary axis travels with a speed ve = c/ne. This leads to a phase difference between the two components as they exit the crystal. When ne < no, as in calcite, the extraordinary axis is called the fast axis and the ordinary axis is called the slow axis. For ne > no the situation is reversed.

where λ0 is the vacuum wavelength of the light.

Waveplates in general as well as polarizers can be described using the Jones matrix formalism, which uses a vector to represent the polarization state of light and a matrix to represent the linear transformation of a waveplate or polarizer.

Although the birefringence Δn may vary slightly due to dispersion, this is negligible compared to the variation in phase difference according to the wavelength of the light due to the fixed path difference (λ0 in the denominator in the above equation). Waveplates are thus manufactured to work for a particular range of wavelengths. The phase variation can be minimized by stacking two waveplates that differ by a tiny amount in thickness back-to-back, with the slow axis of one along the fast axis of the other. With this configuration, the relative phase imparted can be, for the case of a quarter-wave plate, one-fourth a wavelength rather than three-fourths or one-fourth plus an integer. This is called a zero-order waveplate.

For a single waveplate changing the wavelength of the light introduces a linear error in the phase. Tilt of the waveplate enters via a factor of 1/cos θ (where θ is the angle of tilt) into the path length and thus only quadratically into the phase. For the extraordinary polarization the tilt also changes the refractive index to the ordinary via a factor of cos θ, so combined with the path length, the phase shift for the extraordinary light due to tilt is zero.

For a half-wave plate, the relationship between L, Δn, and λ0 is chosen so that the phase shift between polarization components is Γ = π. Now suppose a linearly polarized wave with polarization vector

is incident on the crystal. Let θ denote the angle between

is the vector along the waveplate's fast axis. Let z denote the propagation axis of the wave. The electric field of the incident wave is

lies along the waveplate's slow axis. The effect of the half-wave plate is to introduce a phase shift term eiΓ = eiπ = −1 between the f and s components of the wave, so that upon exiting the crystal the wave is now given by

denotes the polarization vector of the wave exiting the waveplate, then this expression shows that the angle between

is −θ. Evidently, the effect of the half-wave plate is to mirror the wave's polarization vector through the plane formed by the vectors

For a quarter-wave plate, the relationship between L, Δn, and λ0 is chosen so that the phase shift between polarization components is Γ = π/2. Now suppose a linearly polarized wave is incident on the crystal. This wave can be written as

The wave is now elliptically polarized.

If the axis of polarization of the incident wave is chosen so that it makes a 45° with the fast and slow axes of the waveplate, then Ef = Es ≡ E, and the resulting wave upon exiting the waveplate is

and the wave is circularly polarized.

If the axis of polarization of the incident wave is chosen so that it makes a 0° with the fast or slow axes of the waveplate, then the polarization will not change, so remains linear. If the angle is in between 0° and 45° the resulting wave has an elliptical polarization.

A circulating polarization looks strange, but can be easier imagined as the sum of two linear polarizations with a phase difference of 90°. The output depends on the polarization of the input. Suppose polarization axes x and y parallel with the fast and slow axis of the wave plate: