The probability density function of a Weibull random variable is:[1]

If the quantity X is a "time-to-failure", the Weibull distribution gives a distribution for which the failure rate is proportional to a power of time. The shape parameter, k, is that power plus one, and so this parameter can be interpreted directly as follows:

In the field of materials science, the shape parameter k of a distribution of strengths is known as the Weibull modulus.

The failure rate h (or hazard function) is given by

where Γ is the gamma function. Similarly, the characteristic function of log X is given by

In particular, the nth raw moment of X is given by

The skewness is given by

The excess kurtosis is given by

. The kurtosis excess may also be written as:

A variety of expressions are available for the moment generating function of X itself. As a power series, since the raw moments are already known, one has

Alternatively, one can attempt to deal directly with the integral

If the parameter k is assumed to be a rational number, expressed as k = p/q where p and q are integers, then this integral can be evaluated analytically.[4] With t replaced by −t, one finds

where G is the Meijer G-function.

The characteristic function has also been obtained by Template:Harvtxt.

The information entropy is given by

The maximum likelihood estimator for the

The maximum likelihood estimator for

This being an implicit function, one must generally solve for

of data on special axes in a type of Q-Q plot. The axes are

. The reason for this change of variables is the cumulative distribution function can be linearized:

There are various approaches to obtaining the empirical distribution function from data: one method is to obtain the vertical coordinate for each point using

is the rank of the data point and

is the number of data points.[7]

Linear regression can also be used to numerically assess goodness of fit and estimate the parameters of the Weibull distribution. The gradient informs one directly about the shape parameter

and the scale parameter

can also be inferred. 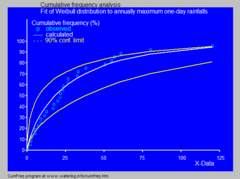 is the shape parameter,

is the scale parameter and

is the standard exponential distribution with intensity 1.[3]

: Parameter describing the spread of the distribution