A basic Weyr matrix with eigenvalue

of the following form: There is a partition

is viewed as an

In this case, we say that

The following is an example of a basic Weyr matrix. 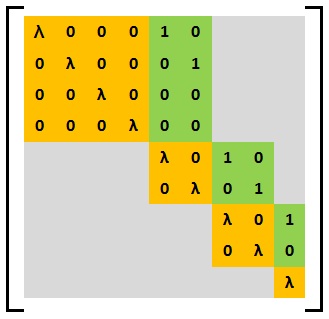 has the Weyr structure

be a square matrix and let

be the distinct eigenvalues of

is in Weyr form (or is a Weyr matrix) if

has the following form:

is a basic Weyr matrix with eigenvalue

The Weyr form is canonical

That the weyr form is a canonical form of a matrix is a consequence of the following result:[3] To within permutation of basic Weyr blocks, each square matrix

is called the Weyr (canonical ) form of

Computation of the Weyr canonical form

Reduction to the nilpotent case

be a square matrix of order

over an algebraically closed field and let the distinct eigenvalues of

. As a consequence of the generalized eigenspace decomposition theorem, one can show that

is similar to a block diagonal matrix of the form

is a diagonal matrix and

is a nilpotent matrix. So the problem of reducing

to the Weyr form.

Reduction of a nilpotent matrix to the Weyr form

Given a nilpotent square matrix

over an algebraically closed field

and a Weyr matrix

is nonzero, repeat Step 2 on

until the first zero matrix

The Weyr structure of

Use elementary row operations to find an invertible matrix

of appropriate size such that the product

is a matrix of the form

. In this matrix, the

formed as a product of elementary matrices such that

is a matrix in which all the blocks above the block

Repeat Steps 8 and 9 on column

via conjugation by some invertible matrix

. Use this block to clear out the blocks above, via conjugation by a product

Repeat these processes on

is now in Weyr form.

Applications of the Weyr form

Some well-known applications of the Weyr form are listed below:[3]