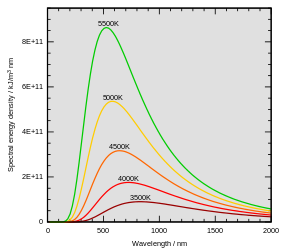 Black body radiation as a function of wavelength for various absolute temperatures. Each curve is seen to peak at a somewhat different wavelength; Wien's law describes the shift of that peak in terms of temperature.

Formally, Wien's displacement law states that the spectral radiance of black body radiation per unit wavelength, peaks at the wavelength λmax given by:

Wien's displacement law may be referred to as "Wien's law", a term which is also used for the Wien approximation.

Wien's displacement law is relevant to some everyday experiences: 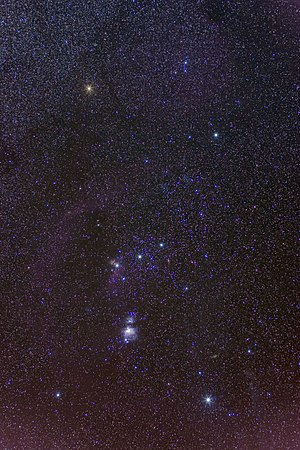 The law is named for Wilhelm Wien, who derived it in 1893 based on a thermodynamic argument. [3]Wien considered adiabatic expansion of a cavity containing waves of light in thermal equilibrium. He showed that under slow expansion or contraction, the energy of light reflecting off the walls changes in exactly the same way as the frequency. A general principle of thermodynamics is that a thermal equilibrium state, when expanded very slowly stays in thermal equilibrium. The adiabatic principle allowed Wien to conclude that for each mode, the adiabatic invariant energy/frequency is only a function of the other adiabatic invariant, the frequency/temperature. A modern variant of Wien's derivation can be found in the textbook by Wannier.[4]

The consequence is that the shape of the black body radiation function (which was not yet understood) would shift proportionally in frequency (or inversely proportionally in wavelength) with temperature. When Max Planck later formulated the correct black body radiation function it did not include Wien's constant b explicitly. Rather, Planck's constant h was created and introduced into his new formula. From Planck's constant h and the Boltzmann constant k, Wien's constant b can be obtained.

(in hertz), Wien's displacement law predicts a peak emission per unit frequency at νmax given by:

where α ≈ 2.821439... is a constant resulting from the numerical solution of the maximization equation, k is the Boltzmann constant, h is the Planck constant, and T is the temperature (in kelvins). This frequency, it must be remembered, does not correspond to the wavelength from the earlier formula which considered the peak emission per unit wavelength.

Planck's law for the spectrum of black body radiation predicts the Wien displacement law and may be used to numerically evaluate the constant relating temperature and peak wavelength (or frequency). According to one form of that law, the black body spectral radiance (power per emitting area per solid angle per unit wavelength) is given by:

Differentiating u(λ,T) with respect to λ and setting the derivative equal to zero gives

which can be simplified to give

the equation becomes one in that single variable:

Solving for the wavelength λ in units of nanometers, and using kelvins for the temperature yields:

The form of Wien's displacement law in terms of maximum radiance per unit frequency is derived using similar methods, but starting with the form of Planck's law expressed in those terms rather than wavelength. The effective result is to substitute 3 for 5 in the equation for the peak wavelength. This is solved with x = 2.821439372.

Using the value 4 in this equation solves for the wavelength of the peak in the spectral radiance expressed in radiance per proportional bandwidth, perhaps a fairer way of presenting "wavelength of peak emission." That is solved as x = 3.920690395. The important point of Wiens law, however, is that any of these wavelength markers, including the median wavelength (or the wavelength below which P% of the emission takes place, for instance) scales according to the reciprocal of temperature.